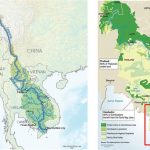 Early this year, many Mekong Delta farmers fought a losing battle against an epic drought, the worst since 1926. Was the drought a harbinger of climate change? Perhaps it was, but more certainly it was an artifact of El Niño. The same ocean-warming phenomenon that brought rains at last to my home in California deflected them away from Africa, India and Southeast Asia. The monsoon rains were light in 2015, and tapered off early. Nonetheless, as soon as they’d harvested the autumn crop, Delta rice farmers hurried to sow the winter-spring crop. They didn’t reckon with an unprecedented surge of saltwater up the Mekong’s nine mouths. Normally, saltwater intrusion might be expected to reach 40 or 60 kilometers upstream. This year, however, it met only feeble opposition from the river’s current. In lethal concentration, four grams of salt per liter or more, brackish river water reached 50 percent further inland than usual, blighting rice fields in Soc Trang and Bac Lieu, wrecking fruit crops in Kien Hoa and Go Cong. “The drought and the salt intrusion was a necessary shock,” blogged reporter Dinh Tuyen, who covers Delta agriculture for one of Vietnam’s leading dailies. “It showed us that we have to wake up to climate change, and find ways to adapt to it.” “There was drought also in 2010,” he continued, “the previous El Niño, but not so bad.”