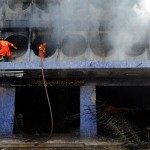 Three people were killed and a dozen injured in four separate bomb blasts in Thailand’s war-torn deep south, police said on 11 July, while another four died from shooting and arson attacks.

More than 6,300 people have been killed in near-daily conflict pitting troops and police against rebels seeking greater autonomy for the three Muslim-majority provinces bordering Malaysia since 2004.

In the latest spate of attacks, three people died on 10 July when a motorcycle bomb exploded outside a karaoke bar in southern Songkhla province’s Sadao district, which borders the conflict-hit region and is frequently swept up in the unrest.