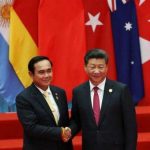 Thailand is ready to serve as a bridge linking the Group of 20’s major industrialised economies and the developing economies in the Group of 77, Prime Minister Prayut Chan-o-cha says. Gen Prayut was speaking on September 4 as he attended the two-day G20 summit in Hangzhou, China — the first ever G20 summit to be hosted by the country. The meeting, under the theme “Towards an Innovative, Invigorated, Interconnected and Inclusive World Economy”, was attended by G20 leaders, a group that consists of the world’s leading industrialised and emerging economies, such as the European Union, the US, Germany, Australia, Canada, Japan, Argentina, Mexico, Russia, and South Korea. Addressing the gathering, Gen Prayut thanked the Chinese government for inviting Thailand, as the chair of the G77, to the summit.