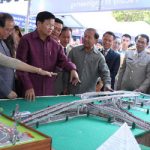 The National University of Laos should set its sights on national development, especially in terms of the quality of the graduates it is producing, as they are fundamental to the nation’s progress. The university is only in the initial stages of its success. There is still a crucial need for well qualified, capable and experienced staff and administrators, to participate in national development, so that Laos will become a modern and civilised nation. Prime Minister Thongloun Sisoulith made this statement on November 3 to mark the 20th anniversary of the university on November 5, 1996 to November 5, 2016, the country’s major institute for advanced education. Mr Thongloun said the Party and government have a strategic plan for socio-economic development from now until the year 2020, which aims to raise Laos out of the UN’s list of least developed countries. To further develop the country and accomplish this objective, one of the main areas of development must be human resources. Everybody has to try hard and keep on training to deal with the reality of the situation. We should all devote ourselves to serve the country as needed, he said.