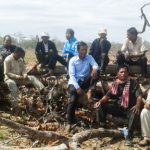 A study looking at economic land concessions in Ratanakkiri province has found that, contrary to the oft-repeated government narrative, they have brought almost no benefits to local communities. Speaking at a launch event for the study yesterday, one of the researchers behind it, Dr Neth Baromey, said that even when ELCs did create jobs, they were less than adequate. “Sixty percent [of respondents] said that while ELCs bring employment, the income is not enough to support their families,” he said. “Most jobs from ELCs are labour intensive, time bound, low paid, dangerous and contrary to the traditional mindset of indigenous peoples, who love freedom.” The study also found that 30 percent of households had fallen into debt, something Tep Boonny – executive director of Save Cambodia’s Wildlife, which funded the research – tied to slow progress in issuing communal land titles. Researcher Dr Ngin Chanrith said that he and his colleagues were concerned that the months- and sometimes years-long process of issuing communal land titles had pushed many towards applying for private land titles. SWC’s Boonny said that private land titles, in turn, provide indigenous people with collateral to apply for microfinance loans they are then unable to repay.