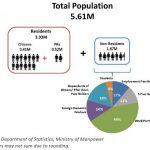 Even as more Singaporeans had babies last year, Singapore’s population growth remained low, rising 1.3 per cent to reach 5.61 million in June. The statistics, released on September 27 by the National Population and Talent Division in its annual Population in Brief report, also showed that the number of citizens rose by 1 per cent to 3.41 million, through births and immigration. The number of permanent residents remained relatively stable at 520,000, compared to 530,000 in June 2015. The non-resident population – largely comprised of foreigners working in Singapore and their families, as well as students – grew by 2.5 per cent to 1.67 million, compared to 2.1 per cent the previous year. Stronger growth was seen in the number of foreign domestic workers and Singaporeans’ dependents on long-term visit passes, the NPTD noted in its report.