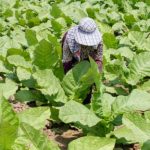 Agriculture officials and struggling smallholder tobacco farmers are cautiously hopeful that tariff exemptions granted under a new trade agreement with Vietnam will lift sagging demand for their crops. Khann Samban, director of industrial crops at the Ministry of Agriculture, said that the market for tobacco has dried up in recent years, though he could not say whether this was a sign of successful anti-smoking campaigns. “The yield of tobacco has decreased because farmers are giving up as the crop has no market, and as such they prefer to grow other crops with higher market demand,” he said. Annual tobacco yields plummeted to 2,000 tonnes last season, about a fifth of the previous season’s total, according to Ministry of Agriculture data. The area of cultivation also declined, falling to 10,000 hectares, from 14,000 hectares a year earlier. Much of the tobacco grown in Cambodia is cultivated and semi-processed before being sold to British American Tobacco Cambodia under a “contract farming” system. There are few options for farmers not part of this system.