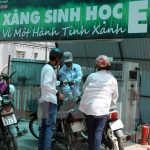 E5 bio-fuel will replace A92 petrol by June 2017 as many localities in the country are using the bio-fuel product, the Ministry of Industry and Trade said. Since the beginning of this year, petrol stations in eight cities and provinces including Hà Nội, Hải Phòng, Quảng Nam, Quảng Ngãi, and Đà Nẵng, in addition to HCM City, Cần Thơ and Bà Rịa-Vũng Tàu, are already required to sell E5 bio-fuel and gradually replace the A92 variant. Other localities have to ensure that more than half of the petrol stations are selling E5 bio-fuel. E5 is a mixer of A92 petrol (95 per cent) and bio-fuel Ethanol (5 per cent). Tests by the Directorate for Standards, Metrology and Quality under the Ministry of Science and Technology showed that local traders have ensured E5 quality. Up to now, there has been no complaint from consumers about the quality of E5 fuel. The Tùng Lâm Joint Stock Company has been the major ethanol supply for E5 bio-fuel production from its two plants with total capacity of 150,000 tonnes a year. The capacity would be enough to produce 3 million tonnes of E5 bio-fuel a year.