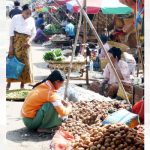 Residents of the nation’s capital should have their fresh produce stalls back by the end of January when upgrades for Tha Pyay Gone Market are expected to wrap up, according to the Nay Pyi Taw City Development Committee. The project, which has been under way for over a month, is being undertaken by the municipality with assistance from the Chinese government, said U Min Lwin Soe, deputy director general of Nay Pyi Taw City Development Committee’s market department. “It will be completed in two months. After the foundations are finished, all that needs to be done is put up the outer steel structure,” he said. The committee made the decision to upgrade the Zabuthiri township market due to water inundation during the rainy season which was disrupting the market’s traders. “A temporary market has been constructed for vendors whose stalls have been destroyed in the improvement works. When the project is complete, they will get their stalls back in the same position as before,” U Min Lwin Soe said. As part of the project, 2.5-metre concrete foundations have been laid to prevent flooding, and the roof has been raised to facilitate better air circulation.